But my mother was one (obviously), and with Mother’s Day fast approaching, I’ve been thinking about her. 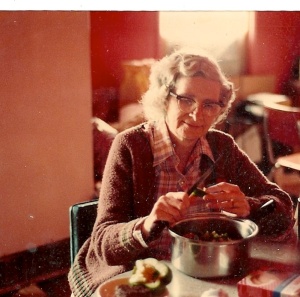 When I was a kid, my mother was a part of our loving, stable family. And at that time, that was all I needed to know. She was very much in my father’s shadow, as he was a larger-than-life, memorable character.

Here are some things I learned about her later.

She was an exceptional caregiver. My father had multiple myeloma for over a decade, and she was always there when he needed her.

She had needs too. She knew she was doing a good job taking care of my father, But she wanted someone else to tell her that, to validate her.

She was not a great cook. Except that to my dad, she was. He was a meat-and-potatoes guy and she gave him exactly what he liked, when he liked it, and how he liked it. Since then I’ve eaten a lot fancier, but I still say she made the best grilled cheese sandwich ever. With white bread and Velveeta.

She was lots of fun to travel with. I understand from other people that they would not even consider traveling with their mothers. We went to Brazil together, and Ireland, and many places around the U.S.

She tried new things. In Brazil she tried local food and drink. If she didn’t like it, she gave it to me or disposed of it, but at least she tried it first.

She was a devoted Christian, but not a bully about it. Once we were in a group and someone remarked that God was a woman. I cringed a little, but what she politely said was, “Oh? Why do you say that?” She told her church ladies that of course she would go to a synagogue or temple if asked. She explained, “How can I expect them to listen to me if I won’t listen to them?”

She was generous. She donated to the Humane Society and other charities. She gave away most of the things she crocheted, to friends or to church bazaars.

She thought globally, even without the Internet. She had pen pals around the world with whom she traded crochet patterns and family news. Sabita, her friend from India, came to visit and her whole family stayed at my mom’s house.

Most people called her sweet, especially when she was older. And she was, but that misses her complexity. She could be determined – even stubborn – and whimsical. She was down-to-earth and creative. She loved bass voices and yellow roses. She was sentimental and believed, at least a little, in ESP. She gave stale candy to trick-or-treaters she deemed “too old.” She never minded my father’s incessant flirting or that his nickname for her was “Old Squaw.”

And she was a better shot than my father.

When she couldn’t sleep at night, she would sing herself to sleep with hymns. Before she died, she made my husband Dan promise to sing “How Great Thou Art” at her funeral. And he did.

There are lots more stories I could tell. Why all my friends and I called her “Muzz.” How the campfire scene in Blazing Saddles cracked her up. How she would say, “Just a suggestion,” because she didn’t want to meddle in my marriage. Why she named me Janet. How she told our friend John that dying took too long.

I hate Mother’s Day and all the gooey cards and sales pitches for chocolate and diamonds. But I still love my mother, Ella Delena Rose Coburn, and will always miss her.

P.S. The picture of my mother was taken by dear friend and artist Peggy McCarty. I hope she doesn’t mind my using it.

4 thoughts on “Discovering My Mother”