Cats are supposed to be furry, adorable purring machines that sit on your lap and provide you companionship, right? 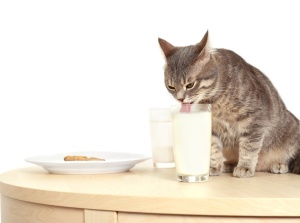 Here’s the truth: Cats are all that, but they can also be naughty, pesty, and downright embarrassing. Having a cat around the house is often entertaining, not always in a good way. But we love them anyway.

Speaking of entertaining, you can expect cats will yak on the carpet when you have important visitors. That’s a given. But we’ve seen worse behavior.

Little Maggie, a half-grown stray, once interrupted a lively game of Trivial Pursuit by dragging a hiking boot (of the smelly variety) into the living room, by one shoelace. It made loud clumping sounds as she strove mightily to bring us her kill.

And on the subject of gifting humans with dead things, Django used to save his kills “for later” by putting them in his pantry. It wasn’t our pantry – it was the innards of our sofa. He also left half-mice lying around, usually in the bathtub, where they were at least easy to clean up, but not so great for visitors.

Toby and Garcia both had a craving for pizza – so much that they liked to walk or even jump on them. I tell you, there’s nothing like a paw print in the cheese to spoil your appetite.

Unless it’s tongue prints in the butter. If you leave butter out on the table or the counter, a cat will assume it’s an invitation to snack. Their rough little tongues leave striped impressions that instantly betray their endeavors, even if you don’t catch them at it. It’s disgusting. Take my word on this.

Other food violations abound. Once my husband and I were eating in front of the television, our plates on the coffee table, when our foster cat Joliet took a notion that she wanted to dine too. She swooped in, seemingly from nowhere, and without hesitation snatched a steak from right off the plate and skedaddled, steak flapping in her wake. We could barely afford steak for ourselves, much less Joliet, so we rescued the rib eye and washed it off. I’m just glad that wasn’t one of “in front of guests” incidents.

Then there’s what cats do to their companion humans. Kittens are probably the worst. Our cat Louise grew into a polite, sweet-tempered cat. But when she was a baby, she was a vampire kitten with a fetish for toes. Kittens have tiny, pointy teeth as sharp as little needles. And they are relentless. A moving toe is a prime target, but even the stationary toe of a sleeping person is considered fair game. (Until she grew out of the habit, which kittens do (thank God), her nickname was Naughty Baby Fek’lhr, (a joke only geeks get).)

Toes aren’t the only body parts at risk, and biting is not the only thing you have to worry about. Dushenka licks. Last night she licked my nose and forehead. More often she licks my husband, anywhere he’s got hair, which is pretty much everywhere. She licks his eyebrows, his beard, his chest hair, his arms, and whatever else she can reach. And she doesn’t just give him a single lick and then stop. She keeps on licking with her rough little tongue (see butter anecdote, above) until he can’t stand it anymore. (I ‘ve never seen her lick his armpits, though I once knew someone whose cat liked to do that.)

But of all the naughty behavior I’ve seen from an otherwise adorable cat, none has rivaled the time Bijou crashed my party. I had about six or eight friends over and we were in the living room and kitchen, chatting merrily and listening to music, when suddenly the cat appeared from the direction of the bathroom. All conversation stopped when we saw that she was carrying a pink tampon applicator, sticking out of her mouth like a little bubble gum cigar.

But I loved her anyway.