I have very few happy memories associated with Valentine’s Day. The only one I can think of offhand is the one when my long-distance boyfriend actually sent me flowers. I took a Polaroid picture of them and married him. (Not directly because of that, but it sure helped.)

I would post the picture of the flowers, but scanning a Polaroid from a hundred or so years ago seldom produces anything but a colorful blob. I suppose I could pass it off as a scanned Polaroid of an Impressionist painting.

Valentine’s Day came to my attention, as it does to most of us, in grade school, where it was shown to be a meaningless exercise. I do not think that making “mailboxes” out of brown paper lunch bags had any actual educational value. And, after the teachers figured out that letting the kids decide whom to give valentines to was a way of separating winners from losers, valentines for every classmate became mandatory. The only technique left to express your true feelings was to decide which valentines you thought were the crappiest and give them to the people you liked least. So perhaps it was an exercise in passive-aggressive behavior, which is an important thing to know and recognize.

Then there were homemade valentines, usually reserved for relatives. These did teach me an important lesson. I would make my paper heart, ask my mother how to spell “valentine,” sign my name, seal the envelope, and continue on to the next. (Lather. Rinse. Repeat.) After about the fifth round of this game, my mother suggested that I write all my cards before I sealed them up, thus having a model for the spelling of “valentine.” It seemed to work.

But again, I digress.

The funny thing (to me) about Valentine’s Day, other than the commercials that equate romantic love with nearly anything you can purchase, is that it reverses the usual ways holidays come to be.

For many (or most) holidays, pagan peoples had a series of holidays celebrating natural events – planting, harvest, astronomical events – and important concepts – fertility, remembering ancestors – throughout the year. The Christian churches did not like to encourage pagan celebrations, but they couldn’t actually say, “Don’t celebrate.” Back then that was about the only fun to be had.

So the various churches took the various pagan holidays and grafted Christian meanings onto them, the most notable being Christmas. I’m not knocking Christmas or saying you shouldn’t believe in it or shouldn’t spend gobs of money on presents. But certain related pagan customs have survived. The Christmas tree was a Druid practice, for example.

(Other graftings did not take as well, so now we have fertility symbols including bunnies and eggs somehow associated with the birth of the Savior.)

However, Valentine’s Day is exactly the opposite sort of holiday. It started out religious and has been so altered that the connection is nearly invisible. St. Valentine was a Christian. He never gave flowers or chocolates or diamonds to anyone. This post that’s been floating around the Internet puts it nicely: 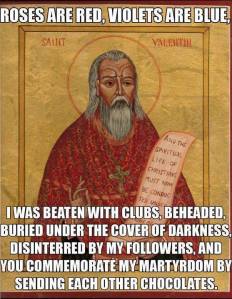 No, what Valentine did was send encouraging notes to other Christians and sign them “Your Valentine” while awaiting execution.

Kind of sucks the romance out of the whole thing, doesn’t it?

I do, however, celebrate Feb. 15, Discount Chocolate Day.

P.S. Don’t get me started on what happens when the government tries to mess with holidays.