Linus’s security blanket. Radar O’Reilly’s teddy bear. That kid in Mr. Mom‘s woobie (which seems to be where the term “woobie” was invented). (See https://www.youtube.com/watch?v=vSVCQ-NmTac.)

What do all these things have in common?

They’re what psychologists call “comfort objects,” or as Wikipedia defines it, “an item used to provide psychological comfort, especially in unusual or unique situations.” 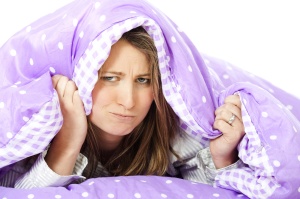 But look again at that list. What’s different about one of the names? Radar O’Reilly is an adult, or at least grown-up enough to be a corporal in the U.S. Army. Some of the characters on the show and in the audience poked fun at him, but most understood – Radar was in a strange and dangerous place and needed a comfort object to remind him of his childhood home in Ottumwah, IA.

And Radar isn’t the only adult who needs a woobie of some sort. Alabama journalist Anna Claire Vollers wrote:

Last year, the hotel chain Travelodge polled about 6,000 people in Great Britain and found 35 percent said they sleep with teddy bears. A surprising 25 percent of men admitted to bringing their teddy bears with them on business trips.

So now I have a confession to make: I own an array of comfort objects and sometimes take them with me on trips. Once I even took a stuffed bunny with me to a sleep study. (Let me be clear: It was not a taxidermied bunny, but what I believe are now called plushies. For taxidermied animals as comfort objects, you should check out The Bloggess.)

My habit started in childhood, when I preferred plushies to Barbies. Every year our Easter baskets contained, in addition to candy and fake grass, a plush bunny. One year I won a plush bunny three-and-a-half feet tall in a raffle. It was wearing a blue and yellow checked dress. My mom found the same fabric and made me a matching one.

Now my collection includes, in addition to bunnies and bears, crocheted armadillos, assorted Beanie Babies (including a crab and a spider), a giraffe, Thing One and Thing Two from The Cat in the Hat, and a Raggedy John Denver doll that a friend made me (the little heart on his chest says “Far Out”).

Nor am I the only one among my circle of friends who treasures assorted comfort objects. Two of my friends have plush animals that could be either husky dogs or gray teddy bears (which they call “huskie bears”). Our friend John had a toy bunny (“Lovie”) to sleep with at home and borrowed a bear my mother had made when he napped at our house after Thanksgiving dinner. My sister had a 12-inch square piece of cloth from her childhood that she named “Tag.” She kept it under her pillow at college. Her roommates teased her unmercifully about it, though really it was a miracle Tag had lasted that long.

One friend even received as a gift a plushie called “My First Bacon.” As I recall, it talked, though I’m not quite sure what talking bacon could say that I would find soothing, except possibly “Eat me.” (Like the cake in Alice in Wonderland. Get your mind out of the gutter.)

But now someone has gotten serious about the therapeutic effects of comfort objects. Wikipedia notes:

Inventor Richard Kopelle created My Therapy Buddy (MTB) in 2002 as a self-described transitional object to benefit “one’s emotional well-being”. The blue creature speaks to you when you squeeze it and says any of a number of phrases that include “everything is going to be alright.”

Here’s a video: https://www.youtube.com/watch?v=H6kSqSzWr0w. It shows a pale blue, bald, pregnant Smurf-like object being cuddled by various people to a background on New Age-type lullabies. One clip even shows it in the mouth of a giant, leering shark, which does not comfort me and does not appear to comfort the shark.

I will stick with my Pirate Winnie-the-Pooh, thanks. Or my plush Puss in Boots that makes a sound like a cat coughing up a hairball and says, “I thought we were done doing things the stupid way.” In the voice of Antonio Banderas, no less.

I guess we all find comfort in our own way, even if some of them seem stupid to others.

2 thoughts on “I Want My Blankie!”