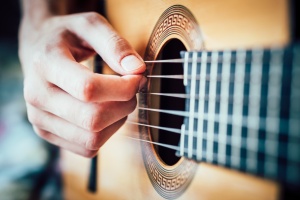 Say you’re attending a convention in a nice hotel. (It doesn’t matter what kind of convention. You could be sales reps or Civil War buffs or Young Republicans.) You notice strangely clad people, both young and old, cruising the hallways and crowding the function rooms. Among them are people dressed as Imperial Stormtroopers, elves, and vampires.

Suddenly you realize that you are sharing the hotel with a science fiction convention. You pick out a normal-ish person wearing a badge and inquire, learning that your suspicions are right. Your informant smiles and tells you that the odd-looking people are “mostly harmless.” Not quite reassured, you continue on your way.

As you pass one of the function rooms, you hear singing. And instruments playing. You can pick out various guitars, a keyboard or two, perhaps some drums or a banjo. And is that a Sousaphone? As someone opens the door to enter, you glimpse a circle of people surrounded by an audience. A woman finishes singing a ballad. Then the entire crowd breaks into song, singing something they obviously all know but you have never heard before. It seems to be about Apollo 11.

What you are witnessing is a filksing.

Filking is a tradition among some science fiction aficionados. Legend has it that the name came from a typo of “folk” on a program, and it just stuck. Defining filk music is more difficult. Many have tried and many have disagreed. But at heart, filking is science fiction music.

That said, the influences on filk are many. Like folk music, it is usually (though not always) accompanied by acoustic instruments or sung a capella. Most of the songs are created by the performers themselves.

The themes of the songs are usually (though not always) based on science fiction and fantasy books, movies, media, or games; science fact, especially the space program; and geek culture generally, with room left over for outrageously bad puns, folk music icons like Stan Rogers, and Scottish ballads. Some use traditional tunes, others are wholly new, and some are parodies of popular songs. There’s even a sub-category of filk called “ose” (for ose, ose, and more-ose), featuring songs about berserker Viking warlords mourning their dead hunting hounds.

That said, the variety of possible songs is impossible to catalogue. Songs at a filk-sing can range from “Telly-Taley Heart” (Poe to the tune of “Achy Breaky Heart”) to “Truck-Driving Vampire” to “Madame Curie’s Hands” to Van Morrison’s “Moondance” to “Beware the Sentient Chili” to “The Cool Green Hills of Earth” to “God Lives on Terra.” Throw in a little Gilbert and Sullivan and Queen’s “39,” and you’ve got a filk!

The closest most non-SF people have come to hearing filk music is listening to the songs of Weird Al Yankovic or the Dr. Demento radio show, if they haven’t accidentally wandered past a filk room in some hotel. Actually, there are even a few all-filk conventions, where the music is the main attraction and not a sideshow. (FilkOntario and the Ohio Valley Filk Fest are two.) At these gatherings, awards are given out, songwriting contests are staged, and the “dead dog” (late Sunday song jam) can go for hours. There you will also find themed filk rooms among the convention spaces, ones devoted to individual performers’ concerts, drum circles, or tributes to departed songsters.

If you venture into the dealer’s room, you can buy tapes or CDs of your favorite performers (many now sell downloads online as well), and even t-shirts promoting their albums. In the hotel’s restaurant, you may run into a party or an awards ceremony or just a bunch of brunchers wearing nametags. In the hallways, you may find room parties overflowing their rooms, or impromptu jam or practice sessions.

Mind you, this tour of the filk world is not comprehensive – and maybe not even accurate. I’m sure to get comments from the filk community saying, “That’s not the way it is” or “You left out X.” But as an introduction for newbies, it will have to do.