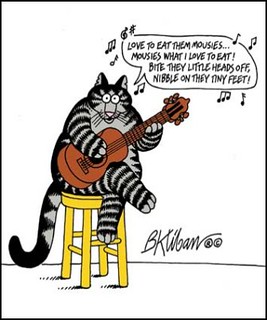 Apparently, it’s also nature’s way to give half a mouse to the one you love.(1) The cats, however, seem unable to decide which half is the good half.

Our cats have always been in favor of eating the back half and proudly presenting the front half. A neighbor’s cat did just the opposite, leaving a regimented little line of mouse butts in front of the garage door, a veritable mouse-ass buffet for . . . well, someone.

Many people’s reaction to this love offering is to scream, which must be mightily confusing to the cats. My husband tries to interrupt the process while it’s still at the gee-this-is-fun-to-play-with stage (2) and escort the erstwhile victim outside.(3)

The usual drill, though, (after the semi-obligatory scream) is to praise kitty as a mighty hunter, then quietly clean up the carcass (4) while the cat isn’t looking. She may expect you to eat the proffered half-mouse. Whether you do depends on how devoted you are to your cat and how much you like rodent tartare.

Justine Alford has a different theory on why you receive half-mice from your cat: “Given that female cats are most likely to bring back animal presents, the most likely explanation for this behavior is that they are trying to teach you the hunting skills that you clearly lack.”

This means that the cat is your mama and you are her baby. And she is thinking, “Come on, dimwit. Give it a try. I can catch these and I don’t even have opposable thumbs. How about you catch mice and give them to me for a change? Honestly, I don’t know how you manage to feed yourself!”

We may need the training after all, when we retire and live under the Third Street Bridge. But don’t tell the cats that. They’re smug enough already.

(1) Remember this tip when Sweetest Day rolls around. And isn’t Mother’s Day coming up?
(2) As opposed to the “aw-this-is-no-fun-since-it-quit-moving” stage.
(3) My husband also gets to escort spiders, snakes, moles, bats, birds, and other still-living catfood outside. He has definite Buddhist tendencies when it comes to home invaders of the non-human sort. Wasps that make it inside I insist that he kill. Stink bugs get trapped in pill bottles, batted under furniture by the cats, and forgotten.
(4) Our cat Django used to take his intended victims into the bathtub, where they had less room to maneuver. The crime scenes were also easier to clean up.

2 thoughts on “Cats, etc.: Love to Eat Them Mousies”