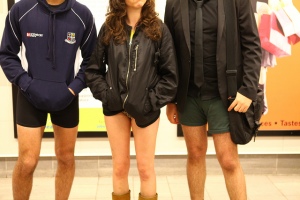 Believe it or not, there is a holiday on which people walk around with no pants. (This year it’s celebrated on May 4 – the first Friday in May.) There are no official rules, other than not wearing pants and pretending that nothing is out of the ordinary. For the shy men, skirts or kilts may be worn. The traditional way to celebrate No-Pants Day is to ride the subway, but we don’t have one around here, so the idea hasn’t really caught on.

(It is a day, I suppose, to work out those dreams you have when you show up at work with no pants on. My problem is that I dream about showing up naked AND NO ONE NOTICES.)

Having a day to celebrate no pants is all well and wonderful. But what about people who wear no pants year-round? People like me.

As a freelance writer and editor, whose only commute is from upstairs to downstairs, I don’t really have to worry about pants. Other writers I know like to wear pants (or skirts) because it gives them a feeling of being at work officially, even if they’re doing that work in the privacy of their own home.

Not me. I relish the freedom of being a work-from-home person and I almost never wear pants while I work. Oh, in the winter I break out the Sheldon-esque plaid flannel jammies and work wearing those. But when the weather is warmer, I settle for a nightshirt or a t-shirt, sans pants.

Really, I could work in even less, except my study is on the ground floor and there’s a window. There’s a shrub in front of it, but still, I find it best not to encourage the neighbor boys.

I find nightshirts soothing and relaxing and completely conducive to work. They also make it easier for me to take naps in the middle of the day, which is one of the other perks of being a freelancer.

But there’s another aspect of the pants vs. no pants dilemma to be considered. A friend of mine and I refer to days when we actually have the energy to go outside and run errands or be social as “pants days,” because we have to put on pants to do so. He’s a writer too and has as much right to work in his bathrobe as I do.

Plus, both of us are given to spells of depression when we can scarcely get out of bed, much less out-of-doors. So we report, “I’ve had three pants days this week” or “I finally had a pants day yesterday,” and congratulate ourselves and each other for having the stamina to insert legs and zip.

I suppose I could wear a skirt or a dress and call it a pants day, but if I do go out, I almost always wear jeans – unless I’m going to a job interview or a meeting with the IRS. I’d be much more relaxed in pajama pants, but there you are. Society has dumb rules. And please don’t tell me that there are things called pajama jeans. That’s cheating.

And by the way, in case you wondered, for me, no-pants days are also no-bra days – but that’s a subject for another time. (https://wp.me/p4e9wS-c8)

4 thoughts on “Is Today a Pants Day?”