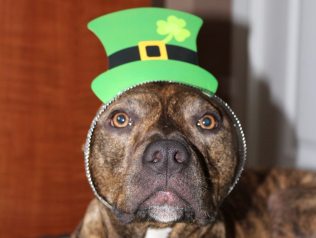 I’ve been to Ireland twice and the funny thing is that no one hit me with a shillelagh or offered me a green beer. The only shamrocks I saw were on t-shirts in tourist shops. None of the Irish people I met wore one. No one insisted I kiss them because they were Irish. (There were at least two gentlemen who wanted to kiss me, but not for that reason. But I digress.)

But those are all things associated with St. Patrick’s Day, you exclaim. You’d never know it, but Saint Patrick was an actual saint. And he had nothing to do with drinking beer.

St. Pat (or Paddy, which is an insult) wasn’t even Irish. He was born in Britain when it was still a province of Rome. Then he was kidnapped by Irish pirates (kidnapped by pirates is good). During the six years he spent in Ireland he was a slave. Later he went back to Ireland to spread Christianity.

But all you’d guess about St. Patrick from his eponymous celebration is that he was a drunkard who wore shamrocks and wanted to be kissed. You’d never imagine that a proper celebration of the day actually involves going to church. (You might have also heard about him driving all the snakes out of Ireland, but that story’s unlikely and doesn’t much figure into the March 17 rowdiness.)

Mostly, these days, St. Patrick’s Day is an excuse to get roaring drunk on either green beer or, if you’re classy, Irish whiskey; wear green; pinch or kiss other people; and puke in the gutter.

You’d think that actual Irish-Americans would be appalled at this sort of thing, playing as it does on stereotypes of the Irish as belligerent over-indulgers who have a thing for clovers. They may claim that they’re celebrating their admittedly noble heritage, but if you were celebrating your heritage, are those the traits you’d want to emphasize?

Columbus Day is increasingly being reevaluated and associated more with indigenous peoples than with Italian-Americans. People don’t get excessively inebriated on wine and eat antipasti on Columbus Day. College students don’t get drunk and rowdy and require the calling in of police to frat row on Columbus Day. Non-Italian people don’t dress up in silly costumes. I don’t quite know how the Italians have avoided the rampant stereotyping, but there you have it.  St. Patrick’s Day gets off scot-free (sorry) in the reevaluating department.

The only other holiday that is even comparable in its stereotypical excesses is Cinco de Mayo. The words instantly conjure up visions of people wearing sombreros, serapes and fake mustaches; drinking beer, margaritas, and tequila; listening to bad imitation mariachi music; and puking in the gutter.

In Mexico, Cinco de Mayo is an actual thing. Ask anyone in America what Cinco de Mayo is all about and they’re likely to say, “Mexican Independence Day.” But surprise! Mexican Independence Day actually is September 16th, recognizing the day that Mexico freed itself from Spanish rule. Cinco de Mayo was all about kicking the shit out of the French and is barely celebrated in Mexico except for some military parades. It’s like thinking that the Fourth of July commemorates the Battle of Gettysburg.

There’s been a lot of sensitivity (and maybe over-sensitivity) lately about cultural appropriation – taking over traditions and artistic expressions of another culture without insisting on authenticity. Examples would be buying “Navajo” rugs made in China, or wearing symbolic feathered headdresses as part of Halloween costumes.

St. Patrick’s Day and Cinco de Mayo are a lot like that, really. The Irish and Mexican cultures have much to celebrate – history and heroes and art and music and more. The way we celebrate them in the U.S. cheapens them. Let’s save getting blind drunk for Super Bowl Sunday – a truly American celebration and representative of our national culture, including beer-colored beer. And if anyone around the world tries to appropriate the team jerseys, painted faces, salty and fatty snack foods, and cheerleader outfits, I say, more power to them. It would only be fair.