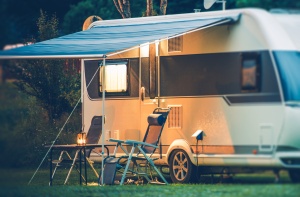 There we were, bedding down on sleeping bags in our tents, the cold, hard ground only a layer of canvas or plastic away. When we sprang out the next morning, our lithe teen forms dressed in green shorts and Vibram-soled boots, we hoisted our backpacks and hiked over hill and dale and rocky trails, singing optimistic songs and breathing deep of the fresh air. We ate granola as we walked.

Later that day, we built a fire and sat upon logs, tree stumps, or little water repellent squares while our dinner cooked slowly, smoke curled around our heads, and mosquitos had their meal before we had ours. Then it was more songs, jokes, stories, and talk till it was time to pour water on the fire, make sure the ashes were cool, and return to our sleeping bags, where, after hours more chat (not the electronic kind, either) we dozed off.

We were Girl Scouts and we thought that was the only way to camp. We’d see camping trailers and pop-up campers and elaborate RVs at the edges of the campgrounds nearest the parking lot and think, “That’s not camping! Those people aren’t having the real camping experience. No tents. No sleeping on the ground. Cooking over propane.” We sneered at them (amongst ourselves, being polite little things) and swore we would never indulge in such a travesty of the outdoor experience. It ought to involve at least a little hardship, after all, or where was the challenge?

Since then we have passed the 40- and 50- and even the 60-year marks and our challenges have largely changed. The last time I slept on the ground was well over a decade ago and an outfitter had to bring the tent, because I no longer owned one. Instead of the chirps of birds and rustle of small animals, the sound of our bones creaking and our groans as we tried to raise ourselves to standing positions awakened us. The outfitter cooked the breakfast and we were truly grateful.

Now even that sort of camping, with its modicum of luxury, is beyond me. For one thing, I need an electrical outlet nearby to run my CPAP machine. For another, my ability to climb from a horizontal position on the ground to an upright posture is, to say the least, difficult, as several falls in my home have proven. Some days I can get up and some days I need help. With my luck, I would be camping on one of the latter.

Now I would welcome a pop-up camper. It may have minimalist beds, but they are off the ground. Even a camping trailer would be nice. Those tents never really kept out the rain anyway and, given the choice, I would much rather sleep under a dry blanket than in a sodden sleeping bag.

(I’m still not completely sold on the huge RVs. I think of them more as a way to see the country than as a way to camp. Though they might be good for families with children and grown-ups even older than I.)

And now we have “glamping,” an ugly portmanteau word of “glamor” and “camping” that touts luxury and style. While glamping you can sleep in comfortable lodges or huge tents fitted out with full-sized beds. With throw pillows, even, in one of the photos I’ve seen. Wikipedia says it offers “the luxuries of hotel accommodation alongside ‘the escapism and adventure recreation of camping.'” “Resort-style services” may be available as you bask in Bali or indulge in a photo safari. In other words, camping for spoiled rich people. I know the rustic-looking cabins with all the comforts of the Waldorf promise a lot, but I can’t help feeling a little like I did as a naive and sturdy Girl Scout.