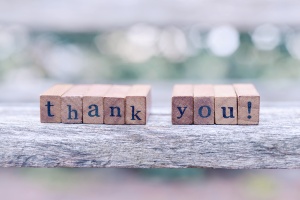 Why am I writing about Thanksgiving when it’s almost Valentine’s Day? Well, I’m not. Not that kind of thanks giving, anyway.

Nor am I going to write about Giving Thanks with capital letters, as one sometimes does around the dinner table or in church.

No, I want to talk about the simple act of saying, “Thank you” to each other.

Someone once observed that whenever my husband or I asked the other for a hug and got one, we said, “Thank you” afterward. It had never occurred to me that this was something unusual or weird, but this woman (a psychiatrist) seemed to think so. Though it happened years ago, I’ve been thinking about it recently.

Where did we ever get the idea that spouses don’t need to be polite to each other? It seems to me that when two people both love each other and live in close proximity to each other, their need for politeness and gratitude is greater rather than lesser. We often see each other at our worst. Surely a little civility is not out of place for the person who shares your life.

Maybe we take thanking others for granted. Sure, we’ll say thank you when someone gives us a present or when they compliment us. But what about all those daily opportunities to thank someone whom we don’t even know?

Admittedly, I probably take it a little too far at times. Servers in restaurants have a largely thankless job. I overcompensate by thanking the person who seats me, brings or takes away a menu or a glass of water, writes down my order, brings my food, and takes away my plate. I even thank the person who brings my check. All told, I can rarely get through a meal without six or seven “thank you’s.” Do I do it because it gets me better service? Well, I believe it does, but that’s not why. I’ve been a waitress.  That’s why.

Customer service is an even more thankless job. We vilify those who are surly or unable to help us. But when someone makes an effort and actually does help, how long does it take to say, “Thanks,” or even “I appreciate your taking the time to help me”? And while we’re at it, the customer service non-bot almost always gives her or his name at the outset of the call. Why not make the tiny mental effort to remember it and say, “Thanks, Chuck”? Imagine yourself getting snarled at all day and the lift it would give you to hear that.

Speaking of service, how many times do we tell veterans, “Thank you for your service” automatically, without thinking about what the words mean? I asked a friend of mine if that ever bothered her. She said that she didn’t care what motivated it and always replies, “It was my honor.”

My husband gives unexpected thank you’s. The last time we voted (in the mid-terms), he thanked the volunteers at the polling place for their time and their commitment in providing such a vital service. He even thanked the volunteer standing out in the rain handing out leaflets because no matter what party she belonged to, she was out there trying. He also thanks the cops who respond to the store where he works for looking out for them.

We teach children that “please” and “thank you” are “magic words,” but we let that sentiment go the way of the Tooth Fairy, as though it’s something we grow out of. Then we complain about young people who have “no respect.”

Of course, we know that “please” isn’t really a magic word. Just saying it will not get us anything we ask for. Even children eventually learn that. But does “thank you” have to fall by the wayside as well?

It’s hard to think of a situation in which saying “thanks” is inappropriate.