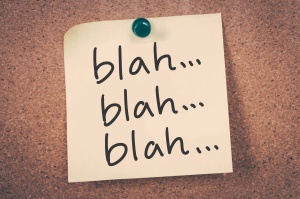 Deadly boring meetings are one of the hazards of office life. They don’t actually take your life (most of the time), but they can make you wish they would. (There have been stories about office workers who died in their cubicles and went undiscovered for days, but these are largely untrue. No matter how rancid the office refrigerator smells, a decomposing body surely out-ranks it. Though too-energetic air conditioning can delay the process. But I digress.)

One meeting that I was in was so memorably boring that I became fascinated with the ear hair of the man sitting next to me. I couldn’t imagine how the individual fibers got so long while escaping his notice as well as his ears. They weren’t just protruding from inside his ears; they had migrated to his earlobes and whatever the technical term is for those folds and channels of the ear. I thought that he might be turning into a werewolf and that, being within chomping range, I would be his first victim. Needless to say, I didn’t pay much attention to the agenda.

Aside from werewolf-watching, though, there are plenty of activities to keep you alert – or, more importantly – looking alert during those agenda-setting meetings, pre-meeting meetings, meetings, and post-mortem meetings (especially appropriate if someone actually has died of boredom), not to mention stand-up meetings, which will be mercifully short if there is a quorum of women wearing high heels. (I mistakenly typed “high hells” there, which is a slip you don’t have to be Sigmund Freud to figure out.)

So what can I recommend to keep you breathing in and out while that guy from IT rattles on about bandwidth and the CEO decides bandwidth actually means how much work she can get out of each of you? Take up a new career. Here are some suggestions.

Take up poetry. This has the added advantage that you look like you are actually taking notes. Of course, you can always draw boxes and weapons on your legal pad or play Candy Crush with the sound off on your tablet, but your arm and hand motions will give you away. No, you should be writing down actual words. Pay attention to the office smarty-pants and write down words he uses like “deleterious” (and other words of three or more syllables). By the end of the meeting, you’ll have some serious free verse. Maybe you can even get it published!

Take up sculpture. There are usually paper clips and coffee stirrers available at every meeting. If not, BYO. Then twist and sculpt away. This has the advantage of keeping your hands busy so you don’t strangle anyone. After a bit of practice, one man I know was able to make a recognizable figure of Don Quixote and a windmill. (OK, we were in a bar and they were margarita stirrers, but the idea is the important thing.) As the meeting ends, subtly slide your sculpture in front of someone else’s chair. If you’re caught, claim that you have a more appalling nervous habit (I recommend rhinotillexomania) and your therapist suggested you try this instead.

Take up musical theater. This is one of my favorites, and can also be made to look like you’re taking notes. Take any musical you’re particularly fond of (I like The Mikado), and recast it using only the people sitting at the table. Would the CFO make a good Pooh-Bah? Would the comptroller do well as Katisha? Then imagine them playing the roles. Afterward, you can recast it with the worst possible employee playing each role. (A variant of this is to recast an old musical with current actors – Kevin Kline and Catherine Zeta-Jones in Man of La Mancha, for example.)

Take up psy ops. This is just plain fun, although it doesn’t result in any notes on your pad or tablet, so perhaps you might combine it with one of the other techniques. Stare attentively at whoever’s speaking, but focus your gaze not on her eyes, but slightly above her left ear (aim for the tip). Or at the knot on the marketing manager’s tie. This can cause distraction – even actual twitching – and no one can tell that you are doing anything. (I understand this is an actual interrogation technique meant to throw the subject off balance.)

You could, I guess, go back to Office Bingo and mark off squares when anyone says “synergistic” or “incentivized” or “skate to where the puck will be,” but when you all yell “Bingo!,” at the same time, the game is over.