“Word Crimes” was a big hit for Weird Al Yankovic, ttto “Blurred Lines,” a song that needed the Weird Al treatment if one ever did. But there are lots more word crimes that never made it into the song, likely because to get radio play, a song has to be under four minutes long. In my life as an editor, I see word crimes that are 182 pages long. 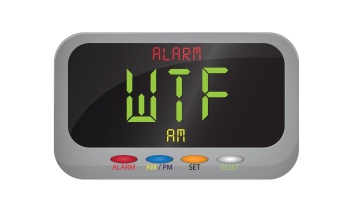 Now back to that “ttto.” It may be fairly easy to decode that as “to the tune of,” just from context. IMHO, AFAIK, BTW, and IIRC are becoming common enough online acronyms, but what are we to do with TH:TBotFA? Or THGttG (sometimes written as THHGttG). I know we all could sit here for hours and make up things that they could stand for, but there are better things to do, like petting the cat or helping the needy.

If you are at all familiar with geek culture, you may know that these acronyms are movie and book titles – The Hobbit: The Battle of the Five Armies and The Hitchhikers’ Guide to the Galaxy, respectively. It’s bad enough that you sound like a noob (newbie) (neophyte) if you ask what ST:TOS means (Star Trek: The Original Series – you know, the one with Captain Kirk). But we fancy literary types don’t inflict acronyms on others. We don’t say FftMC when we mean Far from the Madding Crowd or TCoL49 for The Crying of Lot 49.

Perhaps the most annoying acronym of all is STFUATMM (or more politely, SUATMM. STFU is familiar to all but the most genteel, who abbreviate it as SU, but ATMM is more problematic, since this time no one bothers with lowercase letters to help you guess articles, conjunctions, and the like. No, this phrase is “Shut (the fuck) Up And Take My Money,” which means, “You don’t have to say another word; you had me at ‘buy.'”

Full disclosure: I must admit that in my other blog (bipolarjan.wordpress.com), I do use the acronym YMMV, or “Your Mileage May Vary,” to indicate that my experiences should not be generalized to everyone.

Another language trend which has gotten out of hand is “portmanteau words” –two words squashed together to make a new word with a meaning that combines them both.  (A portmanteau is a cross between a trunk and a suitcase.) Lewis Carroll, author of Alice in Wonderland, was, if not the inventor, surely a most prolific coiner of portmanteaus. The appear everywhere in his classic poem “Jabberwocky” – “slithy,” meaning “lithe” and “slimy,” for instance, or one that the English language has retained: “chortle,” from “chuckle” and “snort.” It’s just so damn useful.

“Brunch” and “motel” are useful portmanteaus too, but advertising has taken such words too far. I suppose it’s too late to kill off “sale-a-bration,” but can we call a moratorium on “transfarency” (airline usage) and “unjection” (prescription medicine)? Bon appe-cheese? Trucksicle?  And anything that ends in “-licious” or “-tastic”?

And while we’re on the subject of advertising, can we please stop having Washington and Lincoln dancing around for Presidents Day sales? It’s undignified, first of all, and there is no known connection between the leaders of our country and linens, unless you credit the rumors that Washington slept virtually everywhere.

You could, I suppose, make a connection between Washington and nurseries that sell cherry trees, but even that would be bogus and nurseries’ advertising budgets are not huge. (They spend it all on catalogues.)

Not to worry, though. Even if we manage to eliminate these heinous crimes, there are plenty of others in existence and soon to be created. Among the ones that make me shudder are weather-related portmanteaus like “Snowpocalypse” and “Snowmageddon”; “gifted” to mean “gave someone a present”; and most words that end in “ize.” And don’t even get me started on the way my husband pronounces “foliage” when he reads those nursery catalogues. Or how “catalogue,” “dialogue,” and “doughnut” are spelled these days. Or…or…or…