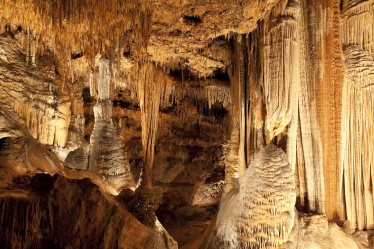 I hear that nowadays Girl Scouts go in for computer programming and rooftop gardening. I’m not knocking that, but back in the day it was hiking, camping – and caving.

(Exploring caves is also known as “spelunking,” which is a wonderful word. It sounds like a quarter dropped into a toilet.)

You might think that spelunking is a young person’s game, but that’s simply not true. I didn’t stop caving when I got too old for Girl Scouts. There are plenty of caves that adults – even seniors – can enjoy.

Here’s a look at a few of my caving exploits through the ages.

Young and stupid. One of the caving trips my troop took was to Carter Caves, in Olive Hill, KY. The site featured a number of caves, including “wild” caves (those not improved for tours). X-Cave and Saltpetre Cave were fun, especially after we took the tours a few times and could chime in at appropriate points in the guide’s spiel.

But Bat Cave was my favorite. Just like it sounds, Bat Cave was a nesting site for the little mammals, though the tours were carefully scheduled to give the bats priority use of the location during their favorite times. It was one of those wild caves, so the tour included rough terrain, tight squeezes (invariably named “Fat Man’s Misery” in this and every other cave), and crawling on our bellies through guano.

Which is why I say we were young and stupid. Guano is bat shit, and inhaling the dust from it can lead to respiratory problems including histoplasmosis. And there was a lot of bat shit. (Today’s rooftop gardeners may be interested to know that guano is an excellent organic fertilizer. Just don’t inhale it.)

Grown-up and adventurous. During our many back-and-forth trips to Philadelphia, my husband and I kept seeing a sign for Laurel Caverns, which is south of Pittsburgh, and just off the Turnpike. After years of saying, “We’ve got to stop there sometime,” we finally did.

Laurel Caverns featured a developed sandstone cave and miles of wild limestone caves. At the time it was possible to go into the undeveloped caves without a guide, if you had the proper gear. (I understand this is no longer so.) So Dan and I donned hard hats with lamps, clasping our rudimentary maps, and squeezed through the small hole that led to subterranean wonders.

Limestone caves feature stalactites (hanging down), stalagmites (reaching up), and flowstone formations. This one also featured boulders. Huge boulders. Boulders the size of houses, in some cases. As we clambered over those, my foot slipped between two rocks and I heard a crack. “Uh-oh,” I said (or words to that effect) as I waited for the pain to hit. It never did. Rather than breaking my leg, I had merely dislodged a couple of stones that clanked together while rolling downslope.

And that was a Very Good Thing, since such injuries required hauling a person out in a basket through that little squeeze hole I mentioned. Also, you could stay down there a long time, since it wasn’t till the end of the day that the owners matched up the list of spelunkers with the cars in the parking lot and went looking for anyone missing.

Older and slower. One of my favorite caves ever was Kartchner Caverns, in Benson, AZ, not far from Tucson. Discovered in 1974, the cave was developed with an eye to preserving it, while still allowing access to young, old, and handicapped alike. After entering through an adit (being a cruciverbalist as well as a spelunker, I was thrilled), you follow level paths, ramps, and switchbacks into the depths, culminating in a gigantic feature that looked like (and was named after) a pipe organ.

There the guides, after giving proper warning, turned off all the lights so the cavers could experience total darkness. (Actually, most caves do this, but they warn you first. Although if darkness and claustrophobia bother you, spelunking is probably not for you.)

All in all, it was the best preserved and most accessible cave I’ve ever seen. While wild caves are amazing and awesome and self-guided tours are adventurous and exciting, there’s something to be said for caves that invite anyone to enjoy.

And when we came to the surface and reentered the visitor center, there waiting to take their turns in the netherworld were one group of bikers and one of – you guessed it – Girl Scouts.