Have you ever had the feeling of waking up one morning and not recognizing the world around you? I’m not talking about the results of a weekend in Tijuana. Just the sense that the world is passing you by. Phones are now cameras and recorders and TVs and computers and watches. To communicate, you must recognize obscure acronyms – not just LOL or BRB, but IIRC, AFAIK, SUATMM, and FTW (two meanings). Your car tells you where to go and parks itself. 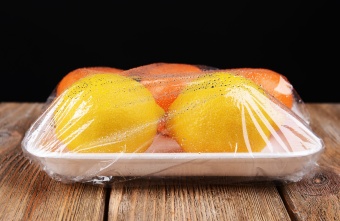 … packaging concerns? Remember that circle of little green arrows that appeared on everything? They used to mean “Recycle – Reuse – Rsomethingelse.” Resist, maybe? Anyway, it was a plea to think of the environment, particularly in packaging. Styrofoam and plastics were going to be replaced with paper, cardboard, and other substances that wouldn’t persist in landfills until the dinosaurs returned.

If plastic packaging couldn’t be eliminated, it was going to be reduced (that’s the other R!). No more individually wrapped slices of cheese inside another outer plastic wrap! No more toys encased in plastic inside an additional plastic shell wrapped in bubble wrap with styrofoam inserts! We were all going to carry string bags and put our vegetables straight into them. Toys were going to have a simple paper price sticker on the bottom.

Needless to say, none of that happened, except in a few enclaves of hippiedom, which have not been supported by the manufacturers and wrappers. We still see styrofoam trays of two tomatoes wrapped in plastic, and we bag them in plastic instead of nice, biodegradable paper. (The plastic bags are supposed to biodegrade too, or be repurposed as plastic water bottles, which are now taking over the earth.) Now we even have tiny plastic snack trays with wee little compartments for each separate snack and a foil topper.

…dark roots? It used to be that dark roots were a bad thing, especially for blondes. They gave a graphic way to measure exactly how long it had been since the last beauty parlor visit or home dye job. Just look at Penny on The Big Bang Theory – every season her do-of-the-year features blonde tips and brown roots. Look at any number of Hollywood icons (male and female – think Guy Fieri). Hell, look at the cashier at the local CVS or Waffle House waitress. Her roots could be six inches long before the blonde starts.

Of course, hair color companies still sell root touch-up kits, but their hearts don’t seem to be in it anymore. Maybe it’s the rainbow-colored tips that are doing it. Who looks at your roots when your coiffure features stripes of electric blue and pink? Not that I’m knocking it. I have once or twice considered getting those clip-on colored stripes, just to see how they looked. I feared I was too old to get away with it, though, until I saw a commercial featuring a woman with gorgeous silver hair with two inches of blue tips.

… pantyhose? One day I had a meeting to attend, after years of not being in the business community. So I dusted off one of my respectable business lady outfits and went to the store in search of pantyhose. There weren’t any. At least the only kind I saw were knee-high hose meant to go under slacks. And damn few of them. Plus, this was after tights, but before leggings, so I didn’t have many other choices. I bought the knee-highs and quickly switched my outfit to a nice Hilary pantsuit.

Later I asked a friend. “I know women still wear dresses. What do they wear on their legs now?”

“They go bare-legged? In offices?”

“And what did they do with all the space in the pharmacies and grocery stores that used to have walls of pantyhose?”

“Razors. I think young women shave everything from the waist down. You know all those razor commercials with topiaries? They’re metaphors.”

“Ordinarily I like metaphors, but that is just too…”

Yes, I’m old! Yes, I’m cranky! No, I don’t want pantyhose to come back! But at least stay off my lawn, all you hussies with nekkid legs!

2 thoughts on “Whatever Happened To…?”