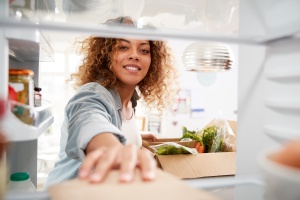 A while back, I wrote a blog post (https://wp.me/p4e9wS-KI) about our experiences with various meal delivery services, the kind where you find a box of food left on your doorstep like an orphaned child. Then you bring it in, cook it, and eat it. (This is apparently turning into a Grimm’s fairy tale.)

Since then, we have had a couple more experiences with meal kits, so I thought I would update the post.

One of the meal services that we hadn’t tried was Freshly. Freshly differs from the other meal delivery kits in that, instead of sending you a bunch of ingredients, they send you already prepared meals for you to microwave. At first this seemed like something that would go with our low-maintenance cooking lifestyle, but then I realized that what we were getting was basically classier TV dinners.

Not that the meals involved Salisbury steak, mixed veg, and a blob of mashed potatoes, with possibly a square of apple un-crisp if you got the fancy kind. We had chicken tikka masala, mahi, and cod cakes as our week’s choices, and they all came out of the ‘wave hot and appealing-looking. They weren’t bad.

The only thing was, they were hard to modify (well, and the portion size was a bit small, too). The tikka masala, for example, we both thought could have used more spice. Of course, we could have sprinkled red pepper flakes on top (if we had any left over from the previous day’s delivery pizza). Or we could have doused it with any of the weird spice blends my husband is in the habit of bringing home from the store. What we couldn’t do, however, was add an ingredient into the sauce and let it mingle with all the other flavors until they decided to play nicely together.

Then EveryPlate, one of the meal services I had tried before, lured me back with a special offer I couldn’t resist. Our first three meals were chicken fajitas with lime crema, pasta with sausage and squash ribbons, and pork schnitzel with cucumber/potato salad. This week we received honey-glazed pork chops with roasted broccoli, Cajun chicken sausage penne, and lemon-thyme chicken linguine. Next week we’re getting hoisin-glazed meatloaves with wasabi mashed potatoes, sausage-stuffed peppers with couscous, and harissa-roasted chickpea bowls with avocado dressing. (The three-week offer was one thing that made it so appealing.)

These are meals that we can adapt if we want to. For example, I may want to cut back on the amount of wasabi in the mashed potatoes because of my feelings about wasabi and because, since they’ll send it as a separate ingredient, I can. Likewise, we can use less salt than the (included) recipe recommends, as my husband is (supposed to be) on a heart-healthy diet and cutting down on salt is an easy change to make. (So are sensible portion sizes, which the delivery meals provide.)

The meals do require a bit of prep – chopping, peeling, dicing, stirring, creating squash ribbons (not a thing I do regularly). But oddly enough, that has proved to be one of the things that I like best about them. Since I’m no longer allowed to use sharp objects, my husband prepares the mise-en-place (as they say in cooking shows). I take care of tasks such as putting the potatoes or linguine on to boil or heating the oil to fry the schnitzel.

This has taken us back to a time in our lives when we used to cook together, which I often forget was an entertaining and joyful thing (https://wp.me/p4e9wS-kb). And the choices, while limited to eight per week, provide more variety than the old staples that we have fallen into making, like spaghetti, frittata, and cowboy beans (an invention of our own, from our early married days).

(Since I’ve taken EveryPlate up on their offer, they have let me send a free box of food to several friends. I’m curious to see if their reactions are similar to mine.)

All in all, this experience has moved EveryPlate into first place with me in what is thankfully not called The Great Meal Kit Race (not that I want to give Food Network any ideas). It’s also one of the least expensive services, so I might actually be able to afford it once this trial period ends. I’m hoping that the kits will actually save us money in the long run, since we won’t have to buy an entire jar of wasabi or six tomatoes when one is called for.

I had my doubts when I first heard about these meal kit delivery services, but I’m slowly becoming a convert.