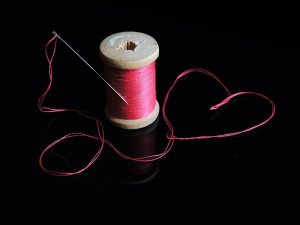 My mother used to make me dresses out of flour sacks. No, we weren’t sharecroppers, although one of my great-uncles was. Back in the day, flour sacks were printed with calico patterns just so people could use them for clothing. It may have started back in the Depression, but it lasted well into my childhood. Later in life, when I was a teen, my mother found a bolt of cloth in the fabric store that was printed with a design that looked exactly like a feed sack. Of course, I insisted that she make me a tunic with the company logo featured prominently as a call-back to my childhood garb.

The gene for needlework may have been passed down through my family. My maternal grandmother was a knitter. She made sweaters for everyone in the family and sewed a little tag into each of them saying “Made Especially for You by Grandma Rose.” She could even knit a sweater from a crochet pattern, which if you know anything about needlework, is quite a feat.

My mother, of course, was a seamstress. She made a lot of clothes for me and my sister, including lots of calico shirts when the cosmic cowboy craze was on in the ’70s. She was prone to whimsy, as you probably guessed from the flour sack story. Once when she found some camouflage-print flannel, she made me my favorite floor-length nightgown (I had ones in yellow and blue) from it. One year at Halloween she even made me a nightcap to go with it. I powdered my hair and went to the party as “Rambo’s Granny,” a joke that no one seemed to get. Another time she made me a forest green wool cape and matching Robin Hood hat, which I wore to my college archery class. (The teacher just rolled her eyes and said nothing.) But most of the time she stuck to doll clothes and dresses and the like.

Later in life, my mother took up crocheting. She collected crochet pattern magazines and even acquired some foreign crocheting pen pals from the classified page. They exchanged handmade Christmas ornaments (crocheted snowflakes “starched” with Elmer’s glue were a favorite) and my mother sent needlecraft supplies that her correspondents couldn’t find in India or the Dominican Republic. Of course, we all got homemade Christmas sweaters that I would never dare call ugly, though my husband got one with a large moose on it.

I thought that perhaps the needlepoint gene had skipped a generation. I sewed a skirt and vest when I was forced to in junior high home ec, but my crafty efforts were more usually paint-by-numbers or wood-burning or ceramics. Then I discovered latch-hooked rugs, which involves short strands of yarn and a device that looks like it was designed to be used on high-button shoes. I still have on the sofa a small pillow that I latch-hooked and somewhere there’s a planet-scape rug that I hooked. This may have been a different manifestation of the needlework gene, as my maternal grandfather braided rugs in his time.

Hooked rugs quickly became passé. I’ve noticed that needlework crafts tend to come in waves like that. So next I took up needlepoint, then bargello, and eventually found my métier in counted cross-stitch. This provided the illusion of sewing without the need to actually sew anything. Instead one followed a pattern of wee Xs in different-colored thread (called floss) to make a picture. The cloth was full of tiny, regularly spaced holes to make the Xs in. It took less skill than embroidery and produced works that were easier to give away than hooked rugs. My mother-in-law still has a set of red-and-blue quilt-patterned pillows that I made for her.

Now, however, my eyesight continues to grow poorer and my hands to shake more with each passing year, so I’ve had to give up cross-stitch. Despite the fact that my mother continued to crochet dolls and stuffed animals for her church’s Christmas bazaar while her eyes were failing, I still don’t crochet. I can never get the tension right although there’s lots of it my life. And since I don’t have kids, the needlework gene ends here.

Still, I haven’t lost my interest in the needle arts. Just start doing petit-point or quilting near me and I’ll be looking over your shoulder.