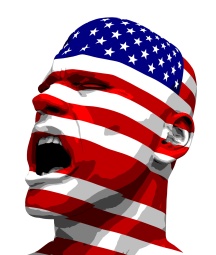 Gaslighting appears to be the latest “trend” in emotional abuse. Articles abound on the subject, from definitions of the term to checklists of signs to analysis of the abuser and the abused. I’ve written a number of times about gaslighting, in particular how it relates to mental health.

The next topic that has been appearing under the headline “gaslighting” is whether the American people as a group are being gaslit. Let’s take a look, shall we?

To start with a definition, gaslighting is a form of emotional abuse in which the gaslighter denies the other person’s perception of reality, with the intention or the effect of making that person think that she or he is crazy. There are a number of classic emotional abuse techniques involved such as isolation, projection, dehumanizing, and others. It is usually an intensely personal interaction between two people, though it can also happen when more than one family member “gangs up” on a relative, for example.

But increasingly now it is being said that an entire group – the American people (or some subset of them) – is being gaslit by another group.  Call them the Powers That Be or more familiarly the Government with a capital G.

Let’s take one example, climate change. We know, according to almost every climate scientist, that climate change and global warming exist. Yet the Government has instructed various of its agencies to remove any mention of climate change from their documents and websites.

Take another example of denying reality, statements by politicians. Some of these are untrue (that is, lies), but in many cases, video or audiotapes exist that prove them wrong. Either the politician did not say what she or he claims was said, or has changed stances since the original statement.

What about general statements about reality? Suppose the Government says the economy is booming, but all you see around you are failing businesses, people out of work, people working multiple jobs to get by, or working people living below the poverty line. The Powers That Be are denying your perception of reality and they usually have statistics to “prove” it.

This may indeed be gaslighting. We are left to wonder which is true – our perception of reality or the Government’s. The Government has an ulterior motive for denying our perception of reality – to put forth their own vision and say that theirs is true and ours is wrong. We might indeed be tempted to doubt the evidence of our own perceptions and wonder: Is that true? Is the economy really in great shape? Maybe I’m mistaken. Maybe I’m crazy to hold the view I do.

The antidote to this kind of gaslighting is to do work that few of us are inclined to or able to do – our own research. Most of us are unequipped to do in-depth research on economic theory and the sociological implications. All we can do is rely on the perceptions of others, perhaps people we consider to be experts or people who share our perception of reality. Support of this kind is one of the ways to defeat gaslighting.

The temptation here is to pinpoint one specific area of the Government – one politician – and claim that he is gaslighting us. I won’t go into specifics because I fervently dislike diagnosis as a distance (https://wp.me/p4e9wS-AT). But let’s say that a politician denies nearly every perception of our reality and calls the people who disagree crazy.

This is only gaslighting if we are tempted to believe that we are crazy. The essence of gaslighting is that the abuser replaces our perception of reality with his or her own. There may be people who disagree with said politician, but few of them are tempted to abandon their own views of reality in favor of his.

I would call what is happening in these cases “attempted gaslighting.” If we do not give in and accept or consider that the other person’s point of view is or might be valid, we cannot be gaslit.

Strength, support, and the light of day are the antidotes to gaslighting. As long as we keep a firm hold on our reality, or belief in our own sanity and the validity of our perceptions, we can resist attempts to gaslight us.