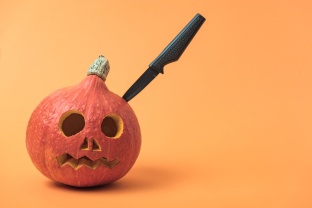 Mind you, I have no problem with the pagan event (Samhain) overtaking the religious one (the eve of All Saints Day).

I have no problem with skeleton cookies and other trappings of Mexico’s Day of the Dead (Día de los Muertos).

I have no problem with children dressing up as witches, vampires, devils, or anything else they want to be, whether it smacks of evil or not. (I do hate the “sexy” trend in adult costumes. Sexy crayon. Sexy Mr. Rogers. (No, really.) Whoever thinks these up has too much time on their hands and too much weird on their brains.)

What I hate is the trick-or-treating. (It should really be called treat-or-vandalism.)

Later on, I put together my own costumes out of old clothing and other things around the house. That was fun, though occasionally baffling. I think most people guessed “gypsy” from the bandana and necklace of gold coins, but what they made of the pink flowered dress and tan plush toy snake I just don’t know. Even I don’t remember what that was supposed to be. (The g*psy outfit came long before we all learned about cultural appropriation and ethnic slurs. But I digress.)

Around that time, the first round of tainted candy scares went through, when children took their goodie bags to the ER to be x-rayed for razor blades and had to throw out apples, Rice Krispie treats, and homemade fudge. That took a certain something out of the playfulness. Halloween parties became a trend, where treats could be supervised and stupid party games involving cold spaghetti and peeled grapes could be played. I think those parties have now taken over from door-to-door begging.

My mother loved the trick-or-treating. She would ooh and aah over the cute little kids and their costumes. What she didn’t like were the teenage boys who went around with pillowcases and didn’t even bother to dress as anything. They didn’t even smear on charcoal beards and pretend to be hobos. (Mom always kept a special bowl of last year’s left-over bubblegum just for them. It was unpleasant, but not actually poisonous.)

I think I started hating trick-or-treating when my Mom got older and couldn’t pop up and down to answer the door, so I had to do the popping and dispensing of candy and old bubblegum and describing of the costumes. But I did it for her.

Later, when I was on my own, I lived in upstairs apartments and other locales that didn’t see a lot of costumed traffic, so I had time to think it over and discover how much I disliked the custom.

Over the years, I’ve grown more and more antisocial, nearly to the point of waving my cane at youngsters and calling them “whippersnappers.” We live in a cul-de-sac at the very back of the neighborhood, so we don’t get many visitors anyway. My husband always buys too much candy and we eat our favorites both before and after the fact. (I have to remind him not to get Butterfingers. I hate Butterfingers.)

Actually, buying too much candy is a defense mechanism for him. One year we didn’t have enough, and he didn’t even have enough loose change for everyone. As the kids were departing in sorrow, he yelled out the door in desperation, “Does anyone want some Coke?” He meant the soft drink, but the shocked look on their faces was priceless.

Now I simply refuse to participate, curmudgeon that I am. I stay in the back of the house and turn off the porchlight, the universal signal for “Don’t stop here. Keep moving.” (Though I don’t know why we bother with porchlights, as trick-or-treating is now always done during daylight hours to cut down on car accidents and candy-muggings.)

These days I’m the one with knees that don’t like popping up and down or creaking up and down, really. I get depressed when I see how many little girls have bought into the pink princess-y thing. Opening the door makes me tense, as we have a cat who is a door-darter. Every other year my husband says, “I did it last year; now it’s your turn.” Sorry, not falling for that one. If you like it, fine. If you don’t do it, I’ll just read a nice zombie novel like Feed to mark the occasion.

This year there is a slightly encouraging lately – having a teal-colored pumpkin outside your door if you will be giving out non-food treats, such as small toys, colored pencils, glow sticks, and the like. It will cut down on food-allergy-related deaths, but it will also result in a lot of stomped-on teal pumpkins. The older kids already have made a sport of stomping pumpkins and running. Imagine their annoyance at receiving a pinwheel or a Koosh ball.

The start of the pumpkin-stomping craze was when I stopped decorating too. You can save Christmas ornaments from year to year, but last year’s pumpkins are just sad. I suppose I could find some nice cobwebs in the basement, but getting them intact to the windows upstairs would be difficult.

Honestly, I could just skip Halloween and be perfectly happy. In fact, I do and I am. Call me a spoil-sport or a party-pooper if you will, but spoiling sports and pooping parties are how I celebrate.