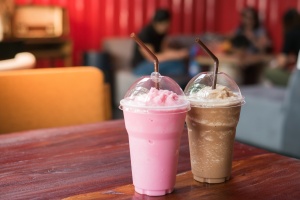 I won’t say I was a picky eater, but when I was a kid, I definitely had strong food preferences. In fact, only certain foods existed for me – and not just because it was in the days before sushi entered the U.S.

Take milkshakes, for example. Though even at the time strawberry and vanilla milkshakes existed, the only kind I would accept was chocolate. I still have this opinion to some degree. For example, when I eat at Wendy’s, only a chocolate Frosty will do. But when it comes to other milkshakes, my tastes have broadened considerably. I love getting peppermint shakes at Christmas and banana shakes whenever. But my new favorite is the salted caramel milkshake at Red Robin, especially if they add a shot of booze to it, something I never even contemplated as a kid. (Salted caramel wasn’t a thing and booze wasn’t an option.)

Then there was jelly. Grape. And only grape. Not apple. Not strawberry. And certainly not mixed fruit. My toast and my peanut butter sandwiches required grape jelly or none at all. In the absence of grape jelly, toast got butter and PB sandwiches got no J.

Now I sample all the varieties of jams and jellies on offer – orange marmalade, blackberry, peach, and whatever they give me at Waffle House, to name a few, not to mention my all-time favorite, apple butter, which I guess is not really jelly. Strawberry is still my least favorite, but I will eat it when required.

Back in the day, the only lunch meat was bologna. I wouldn’t touch pimento loaf or the salami with those little hard things stuck in it that I later learned were peppercorns and wouldn’t have eaten even if I had known it. And forget head cheese! I inspected lunch meat subs (the only kind then in existence) carefully, and picked off the kinds I didn’t like. That left me with bologna and salami with no peppercorns, not exactly a culinary masterpiece.

Back then, ham and turkey were not so much lunch meats, but a breakfast dish and a Thanksgiving treat, respectively. At least that was the only way they were served in our house. Now I find that ham, turkey, roast beef, and even pastrami are acceptable. Strangely, I can hardly eat bologna anymore. Maybe my palate (such as it is) burned out on it all those years ago.

Other foods I turned up my nose at because of the way they were served. Peas, carrots, corn, beans (especially pinto beans with ketchup), and mashed potatoes were acceptable side dishes. Not so with asparagus. At that time, the only asparagus I knew of came in cans. I had never even seen a fresh stalk. Naturally, I assumed that asparagus was a slimy, icky vegetable, somewhat like okra. (If I recall correctly, all our vegetables came in cans at the time, but, honestly, there’s not much you can do to corn or peas to render them inedible. I actually even liked canned spinach, for some reason.)

Now that I’ve discovered fresh and frozen vegetables, my horizons have expanded considerably. I’ve since had fresh asparagus and liked it enough to have it multiple times. I’ve learned to like Brussels sprouts, if they’re roasted. The same with parsnips. Back in the day, roasting was a thing for, well, roasts, and maybe potatoes and onions with them, but little else.

Now I pride myself on what foods I will actually eat. I love sushi, adore hummus and guacamole, and jump at the chance to eat calamari. I have eaten curried goat, octopus, jackfruit, escargot, and pizza with nearly everything, including anchovies (not as a regular thing, but just to try it). Even my mom, purveyor of all those canned foods, learned to sample the local foods and drinks when we traveled abroad. She didn’t always like them (in which case she gave them to me), but by God, she tried them, and I admired her for that.

One of the only things I refuse to eat now is liver and onions. It’s a texture thing; they make me gag. Literally. Even my mom gave up on making me eat liver and onions when she saw that. I have lived my life happily without them and will continue to do so.

So, if you have a picky eater in the household, just wait and keep introducing new things. I once knew a child that would eat only buttered noodles who is now an expert on all things sushi.

I also know an adult who still won’t eat foods that touch on a plate, but you can’t win them all.

1 thought on “The Only Foods That Existed”