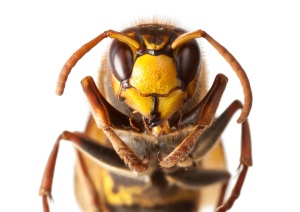 Yes, I know the quotation is “nature red in tooth and claw” and it refers primarily to beasts that have those appurtenances, like lions and tigers and bears. But those don’t scare me much, because I seldom run into them in my day-to-day life. 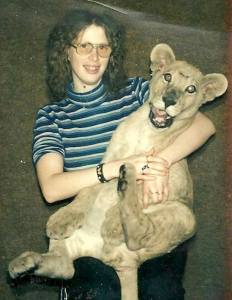 (There was the time, years ago, when a group that should have known better brought a baby lion to the mall and offered to take pictures of people holding it. I couldn’t resist. They handed me the bundle of joy, which weighed at least 50 pounds. It proceeded to lick my ear. Afraid that the lion was just testing whether I was tasty enough to eat, the handlers swooped in and grabbed the lion, but not before they took this picture. But I digress.)

I will readily admit to being afraid of bees – an apiphobe (which, despite appearances, does not mean someone afraid of apes. That would be a pithecophobe.) If a bee gets near me, I freeze and scream until someone braver shooes it away. If it lands on my drink or my person, game over. Even the gentlest of bees terrifies me. My husband swears that carpenter bees don’t sting humans, for example. But I know wasps do, and one once got into the house while Dan was away. Now whenever Dan sees a flying insect in the area, he tries to convince me it was a butterfly or a dragonfly.

In fact, some people will tell you that’s why I got married – so I would have someone who could defend me from airborne attacks. And it would be hard to deny. When he wasn’t home and a wasp got in, I had to hit it with a shoe, then scoop it into a bottle with a lid and take it outside where, if it lived through all that, it could choose a different victim.

Ironically, I took beekeeping in college, in hopes of overcoming my fear. It didn’t work. I was okay during lectures, when we looked at diagrams and tasted samples of honey. But I had to take Valium to go to lab, where we interacted with real, live bees.

But now we have new threats. First came the killer bees, also called Africanized bees, that somehow lost their way and were invading the US through Mexico, last I heard. I think a border wall would have been sensible then, not later, when human beings were the supposed threats. Somehow they never made it to Ohio – at least that I know of. (My husband may have been censoring the news.)

Then came the 17-year locusts. (I’ve had to endure these twice in my life.) I don’t know if they actually bite or sting, but they have a terrible reputation. If they can be a Biblical plague, I might as well be scared of them. As far as I can see, though, the most harm they produce (to people, not to crops) is to drop down from trees in massive numbers and make an icky squishing sound when you happen to step on one, which is unavoidable. Seventeen years ago, I knew a woman who carried an umbrella to protect herself from the falling ones, though I don’t know how she avoided the squooshing noises.

This past year came the murder hornets. I could never steel myself to even read anything about them, but I assume they tied people up, stuffed them in the trunks of cars, stung them, then rolled the bodies down the nearest ravine. At least, it wouldn’t surprise me if they did.

What will come next? Serial killer scorpions? Kidnapper tarantulas? Predatory lady bugs that look all cute and harmless until they attack? By now, I don’t trust any insect (or arachnid) to stay in its place, which is at least ten feet away from me. Not that I would want to touch them with a ten-foot pole.