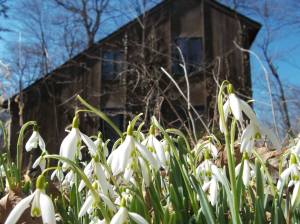 Our house felt remote, surrounded by trees and a small stream and prairie grasses and wildflowers. Our neighbors were remote enough that we could have become practicing nudists, were it not for the invention of telescopes. Actually, it was very close to everything required for modern life.

The animals in our area did not know this. We were regularly visited by squirrels, chipmunks, snakes, bats, deer,  and rabbits. (Also wasps and carpenter bees, but those were much less welcome.)

My husband’s favorite visitors were the hummingbirds. Every summer, one brave hummer would fly up to his study window to let him know that it was time to get out the feeder and fill it up, damn it!

When we first looked at the house we would need to rent (after a tornado demolished our beloved home), I was dismayed to see that it was in a cookie-cutter suburb with zero character. But then I saw a blue jay fly out of one of the bushes. It was the first one I had ever seen and I considered it a good omen.

We moved in and began to make the place our temporary home. The first thing we bought was a double bird feeder, with a regular feeder as well as one for hummingbirds.

And the birds came. In droves (or flocks, I guess). Enough to terrify Tippi Hedren. We saw blue jays, sparrows, chickadees, pigeons, and the occasional red-headed woodpecker, once the word got about in the avian community. Many of the birds were messy eaters and showered seeds on the ground around the feeders, which occasioned the arrival of dozens of birds at a time, eager to chow down at our all-you-can-peck buffet. Then something would alarm them, and they would all take off simultaneously.

The alarming something usually proved to be a squirrel. The local squirrels grew fat and sassy on the spilled seeds. When they were depleted, the squirrels made attempts on the feeder itself. Let me assure you, few things are funnier than watching a squirrel courageously climbing that thin pole and then sliding helplessly back to the ground.

Occasionally a squirrel would make it up to feeder height, then be completely stymied by the construction of the feeder. Stranded on top of the feeder, but unable to maneuver down to the perches, the squirrels eventually gave up and resigned themselves to raiding the buffet on the ground.

The neighborhood we’re now living in is very homogenous, with manicured lawns and houses close enough together to discourage even attempted nudism. (None of the neighbors seems bold or reckless enough to practice the art (hobby? lifestyle? pursuit? avocation?)) With such wild life unavailable, we figured that we were out of luck too when it came to spotting frolicking animals (the type unclothed by anything but fur). If the stereotypical suburban houses and lawns were that uninviting, surely there would be little to no local fauna, aside from the ravenous squirrels. Or so we thought.

We were wrong. We have seen a number of local cats strolling through our back yard (if they count). There has been at least one chubby bunny nibbling our conservatively mown grass. And then we saw a different animal, one we couldn’t quite figure out. It was obviously a large rodent of some kind, bigger than a cat would want to attack, and, as it was brown, clearly not a possum. (With which critter I have had some unfortunate experience – https://wp.me/p4e9wS-46. But I digress.)

As it waddled as quickly as it could toward the treeline at the back of the property, we caught a glimpse of a tail, though we didn’t get a good enough look to determine the size and shape of the trailing appendage. Aside from being startled, we had many questions. Was the tail broad and flat enough that this could conceivably be a beaver? (The next suburb over was named Beavercreek, after all, although around our rental house there was nary a wetland to be seen.) Was it a groundhog (or woodchuck)? Did groundhogs have tails?

A quick trip to Google informed us that groundhogs and woodchucks were the same animal; that they did, indeed, have tails; and that they were almost completely herbivores (which I suppose means it was after the seeds, like everybody else). A check of the hive mind on Facebook produced a consensus that what we had seen was most likely a groundhog, as well as a few jokes about how much wood it was or wasn’t chucking.

Our cats, of course, look upon this abundance with assorted amounts of glee and hunger. We placed a cat tree near the window so they could enjoy this version of Cat Food Network, or mope that they couldn’t reach the birdies to bite them.

Will I be glad to get back to the environs and the familiar wildlife that I miss? Of course. But will I also miss this new diversity and fresh delights that I have found? Of course, also.

But since the tornado flattened most of the trees in our old surroundings, I’m afraid that the fauna will likely change. And nudism will be out of the question.